Why Does Hair On Your Head Grow Long

You know dogs, right? And cats? And weasels, and deer, and kangaroos, and pretty much every other mammal? Well, one thing they all have in common is that, for the most part, the hair all over their bodies is about the same length. So why is it that humans don't have a nice, even coat? The how of hair we understand pretty well. The why? That's a little trickier. {Play} 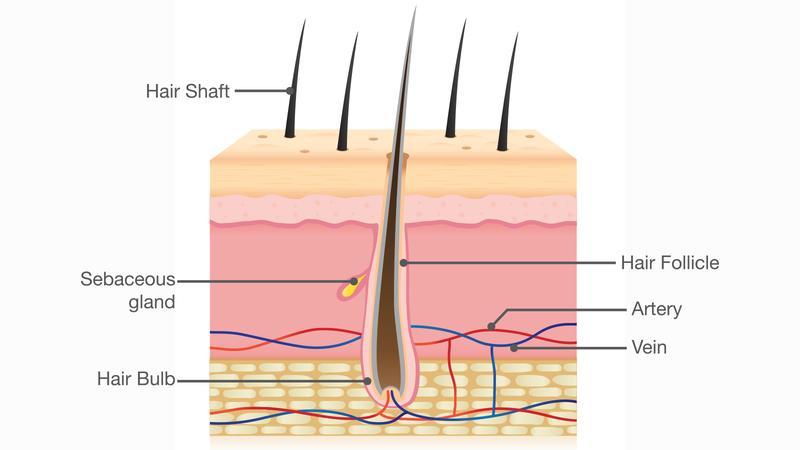 We pretty much understand how hair grows, and we can therefore explain why it is that the hair on your arms and legs doesn't just keep growing and growing while the hair on your head seems to do exactly that. The secret is that, just like you and your raccoon-tail emo haircut days, hair goes through phases of its own. {Play}

This is the growth phase of the follicle, when a protein rooted at its base is hard at work accumulating cells and weaving them into a rope-like structure. As long as blood flowing through your scalp feeds the follicle, it can keep dividing into more cells and pushing farther and farther out of your skin at a rate of about a half-inch per month. {Play}

After a while, even the hardiest of follicles gets worn out. In the catagen phase, the follicle stops producing more cells and your hair stops growing. But you wouldn't know it from the outside. It actually will continue to push through to the surface, but when the end gets to the outside, that's it. {Play}

Once the strand of hair has fallen to the ground like a push-pop pushed too far, the follicle takes a breather. For a few weeks or months, it recovers from this process, and finally, after it's fully recovered, the anagen phase begins again. {Play}

You may have noticed that you (probably) don't lose your hair in giant clumps. That's because these three phases are staggered and only a small number are in the telogen phase at a time. The hair on your head has an anagen phase between 2 and 6 years, while the hair on the rest of your body enters its dormant stages after only a couple of weeks. How long your anagen phase lasts is determined by your genetics, and the longer it is, the longer your hair has to grow. {Play}

Incidentally, that staggered-phase structure is another difference between us and other animals. Many species synchronize their catagen and telogen phases so that they lose their heavy coats just in time for summer, so they can affect the most allergy-sufferers at once. {Play}

It's pretty much impossible to prove exactly why some traits are more beneficial than others, particularly if those traits appeared millions of years before we even had a language. But evolutionary biologists think they have a pretty good idea why we're relatively hairless except on top of our heads. {Play}

Like most modern apes, the early hominids that first came down from the trees were covered in body hair that insulated them in their shady forests. But the forests eventually dried out and turned into savannah, and the hair that kept them warm became a liability. So they lost it — but not all over. We kept the hair on our heads to protect us from UV radiation (since we started walking upright, it wasn't so important to cover every inch), and we kept our eyebrows to divert the sweat from our eyes. And there you have it. {Play}

Not everyone agrees, however. After all, we weren't alone on the savannah, so why didn't lions and zebras lose their hair as well? One theory that just won't seem to die is the "aquatic ape" hypothesis, and the less said about it, the better. But others suggest that we might have lost our hair in response to parasites such as fleas and ticks. Another theory states that we may have evolved our hairlessness for purely aesthetic reasons — we preferred less hair on our partners, so hairlessness tended to be passed down. {Play}

For our money, the answer lies in the heat-regulation theory, especially since we've got elephants and rhinos in the hairless camp as well. Lions, zebras, and other hairy plains-roamers simply developed alternate coping mechanisms for the sun. Plus, we don't have to explain away our lack of webbed fingers. {Play}

اسلامی
This comment was minimized by the moderator on the site

رسول
This comment was minimized by the moderator on the site

سعیده
This comment was minimized by the moderator on the site