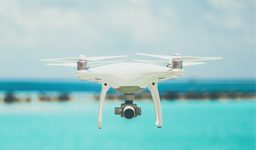 The Good Drone
Following the negative press here's just one example of a positive use for drones.

1. Before listening: answer these questions.

2. Listen for general meaning: now watch the whole video (or listen to the whole podcast). Is this sentence true or false?

3. Listen for detail: listen again and decide if the statements are true (T) or false (F). Put a tick (✓) in the correct column.

4. After listening: Jason is an entrepreneur. What other uses of drones do you think would be very useful? Come up with a new and original idea and, if possible, share this with other English language learners. If you think your idea was so fantastic would you sell everything you owned to get it started?

5. After listening: there are many features of natural conversation. These are rarely covered in course books but you should be aware of them.

Have a look through the transcript and find examples of...

1. a) Drones have been used to deliver drugs to prisoners. Airports have been closed because drones entered the airport flight zones.
b&c) It’s always important to do these pre-listening activities.

5.       ellipsis: The guys are just over there surfing so [I] call them out with my megaphone.

Megaphone:   Guys, we’ve got a big Great White out there.

Jason:           I’m a builder so after this we’re going to build. We um… got our certified licensed pilots, and we film surfers and we do shark spotting at the same time.
When the light bulb moment hit me I... I didn’t know anything about drones and I just believed in my idea so much so I went and got it patented two days later and I started the app process. I sold everything I had: I sold my car, sold all my building equipment, I basically got down to my last $200 at one point and just because I believed in it so much, no one was doing it so I thought well, you know, let’s   let’s get out there and get it started. I was not a techy guy at all and now, you know, here I am uploading from a drone to the backend of the app and you know, things I never dreamed about.

Now I feel the drone system, the drone technology is way better than you know, a man up on the tower looking for a fin out of the water.You know, once you get up in the drone you just see everything, it’s just, it’s just clarified, like a bird. You know, when a bird goes hunting, they see the fish, they dive bomb it. If I went out in the drone right now it’s really grey out there but as soon as I pan down it just turns aqua. We’re seeing a lot, probably thirty, forty sharks, probably got the guys out of the water on about eight occasions.

Megaphone:   Hey guys we got a big Great White out there. We recommend you get out ASAP.

Jason:           The guys are just over there surfing so call them out with my megaphone. We’re not comprehensive shark spotters so we’re not liable for anyone out in the water we just ... because we are out filming surfers, you know, it's duty of care for us. So if we spot a shark here in Bondi, if it looks like a threat, we’ll get straight on to the phone and call the lifeguards and they’ll come out. If they think it’s coming in closer they’ll sound the alarm. But look, if we spot something there and it’s coming in and we don’t have time to call them I’ll use the megaphone and just say, “Guys, get out” and whoever hears from here that’s... this is as good as we can do. This is the first in the world, there’s no one else doing this system what we do with filming surfers and another drone up high up looking at the sharks at the same time.

Yaser
This comment was minimized by the moderator on the site