Mount Everest Is the Tallest?

We've all heard that Mount Everest is the tallest mountain in the world. It's definitely tall: a smidge over 29,000 feet (or a smidge under 9,000 meters), or 20 times as tall as the Empire State Building. But you could actually make the case that other mountains in the world are taller. It all depends on how you measure mountain height. {Play} 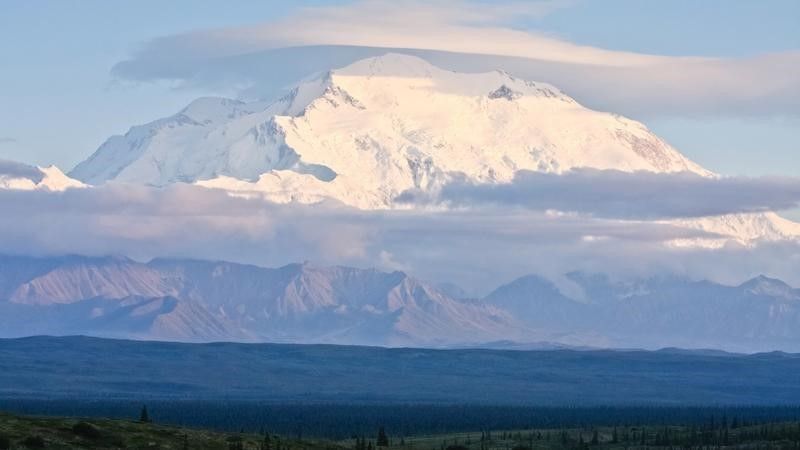 How We Measure Mountains Now

Currently, convention has it that a mountain's "height" is how far it rises above sea level. This comes with some complications, though. For one, sea level varies across the world — by up to 100 meters — due to currents and gravitational variations. It's higher on the West Coast of the U.S., for instance, than it is on the East Coast. Geologists deal with this by gauging where sea level would be if a mountain stood on water instead of land, and measuring from there to the mountain's summit to find its height. {Play}

This gives some mountains an advantage, though. Some argue Everest, in particular, is gaming the system. Mount Everest stands on a roughly 16,500-foot plateau, making it a bit like a person getting their height measured while they wear heels. Measure Everest from the plateau to the summit, and it's no longer the tallest mountain in the world. It's dwarfed by Alaskan mountain Denali (previously Mount McKinley), which stands at roughly 20,300 feet (6,200 meters). {Play}

Which Mountains Is Everest Overshadowing?

It's not just Denali. The convention of measuring mountains from sea level to summit also gives short shrift to any mountains partially submerged in the ocean. Take the Hawaiian volcano Mauna Kea: If you measure from its underwater base to its peak, it's nearly 33,300 feet (10,150 meters) tall. That's almost a mile taller than Everest's 29,000 feet! Our measuring system also minimizes the height of Ecuador's Mount Chimborazo. It rises just over 20,500 feet (6,250 meters) above sea level. However, it has a superlative of its own: Of all the mountains in the world, it's the one whose summit is farthest from the center of the Earth. {Play}

You can argue Mount Chimborazo got a boost of its own, much like the one Everest gets from its plateau. Though the Earth is roughly spherical, it bulges noticeably around its middle. (Relatable, right?) Mount Chimborazo is near the equator, and that gives it a boost when it comes to height — or it just reveals there's no one, perfectly fair way to measure all mountains when they vary so much. {Play}

Get/ be given short shrift:کمتر توجه کردن

مانلی
This comment was minimized by the moderator on the site

مانلی
This comment was minimized by the moderator on the site