Dogs use 19 ways to communicate

It's pretty widely accepted that dogs can't talk (besides Air Bud, of course). That doesn't mean they don't try to communicate with their owners, though. A new study found that dogs often address their humans using a fairly straightforward list of gestures. {Play} 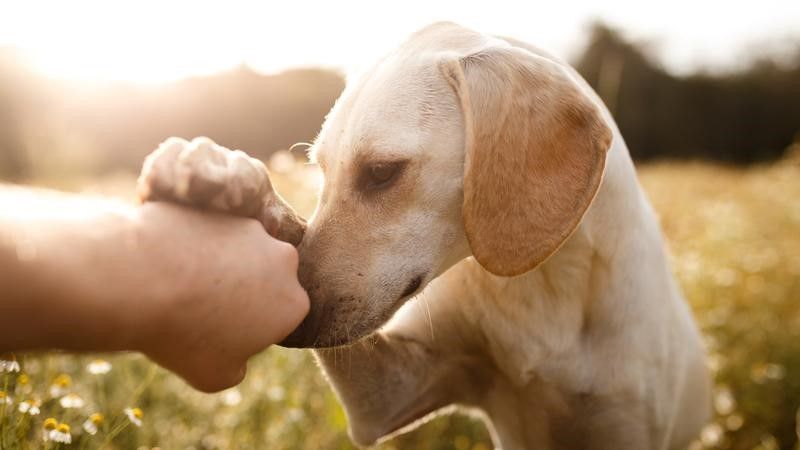 What Is Referential Signaling?

Using intentional gestures to communicate a request is what scientists call "referential signaling." This phenomenon is different from normal movement because the gestures don't serve a practical purpose — they're just symbolic — and they're repeated until the request is granted. For example, a dog might press his nose against your knee until he gets a treat, for instance, but once he has the treat, he'll stop. And yes — dogs are kind of freeloaders in that they only ever address you when they want something. Science has yet to find a canine referential signal for "good human," much less "Let me tell you about my day at the dog park." {Play}

While this might be old news to dog owners, it's new to scientific research. Hannah K. Worsley and Sean J. O'Hara of the University of Salford in the UK discovered it by combing through hundreds of videos of 37 dogs interacting with their owners. They found that the dogs addressed their owners with 19 distinct referential signals, which included rolling over, jumping up and down, and the seated front-paw hover. (These may sound like basketball plays, but think of them more like the dog alphabet.) Sometimes, dogs used a single gesture on its own; other times, they combined a few gestures to get their request across. Their most common requests were for food and water, toys, scratches, and opening a door. {Play}

Referential signaling may be newly associated with dogs, but in and of itself, it isn't new. It's well known that great apes use it to communicate with each other. Human babies use it, too, to communicate with their parents before they can talk. We also already know that it's not exclusive to primates: Recently, scientists discovered that ravens do it too. However, domesticated dogs are the first animals scientists have found that use referential signaling to address another species. {Play}

So Can I Learn Dog?

Kind of. There's no universal dog language, but an individual dog will usually use the same gesture or sequence of gestures to communicate a given request. So for your dog, jumping up and down might mean "Let's play," or it might mean "Feed me, please" — but it likely has a set meaning. By spending enough time with an individual dog, you can learn its dialect. {Play}

A dog's style of communication is shaped by a variety of factors. One is training: A dog that's trained not to bite, for instance, is less likely to use gentle play-biting as a referential signal. Another factor is how many humans live with the dog. The more populous a dog's household, the more expansive its vocabulary of gestures usually is. {Play}

Don't stress too much about decoding your dog's every move, though. Humans and dogs have been evolving alongside each other for millennia, and there's a pretty solid connection between our two species at this point. Dogs read humans effortlessly. They understand our tones and moods, which no other non-human species can do, to our knowledge. They know and care when we're smiling; you can actually tell if a dog is looking at a smiling human based on its brain activity alone. Dogs can even "catch," or take on, our moods. They're basically just really in tune with us — way more so than chimpanzees, despite the fact they're more closely related. So good news, dog owners! Your pet really is communicating with you. Just don't expect a heartfelt soliloquy about how nice it is that you pick up his poop. {Play}

الما
This comment was minimized by the moderator on the site

نشاط
This comment was minimized by the moderator on the site

فلاح
This comment was minimized by the moderator on the site

isaeed88
This comment was minimized by the moderator on the site