The Leaning Tower of Pisa isn't the first tower to lean. It's not even the lean-iest building out there. What sets it apart is its sheer size — and the fact that, despite its severe angle, it's been standing up since the 14th century. Now, scientists have determined how it's managed to stay stabilized. Turns out it's the same reason that it started leaning in the first place. {Play} 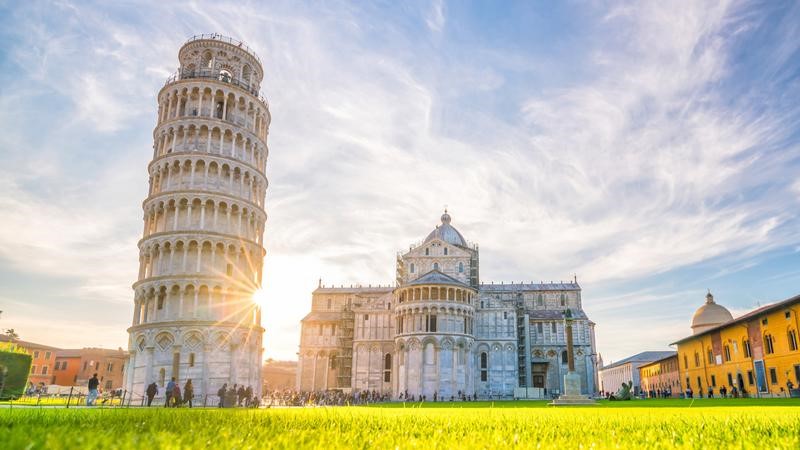 Started from the Bottom

The "leaning" part of "Leaning Tower" isn't anything new, not by a long shot. Construction of the tower began in 1172, and by the time the second story was built in 1178, it was already starting to tilt. Then, the tower took a century-long break for a little light warfare. The construction was put on hold while Pisa fought off Genoa, Lucca, and Florence for about a hundred years. At that point, the tower was leaning about 0.2 degrees north, but it swung back around — after construction started up again and the tower made its way to seven stories, it was leaning 1 degree south instead. As the centuries passed, the tower grew, and so did its angle. It was finally completed in 1378, and despite efforts to counterbalance the tower by building higher walls on one side, it only listed further. At one point, it had gotten all the way to 5.5 degrees, but today, thanks to restoration efforts, it's sitting pretty at 4 degrees. {Play}

According to a new report from the University of Bristol, the thing that keeps the tower standing is the very same thing that caused it to lean in the first place. The tower is positioned between the Arno and Serchio rivers, making the ground loose and soft, being composed of silt, clay, fine sand, and shells. It's easy to see how a 14,500-ton building could get stuck in that substance. But the softness of the soil is also instrumental to the building's longevity. It's all due to an effect called dynamic soil-structure interaction (DSSI), which describes the way that stiff buildings built in soft soil handle major vibrations. You've probably heard the expression about building your house on sand — yeah, it's generally a bad idea unless you have some pretty groundbreaking techniques. The people behind the Leaning Tower didn't have any of those techniques at their disposal, though. What they had was a stroke of incredible luck, but we'll leave it up to you to decide if it was good luck or bad. {Play}

The site of the tower is actually incredibly soft soil. And the materials of the tower are themselves quite stiff. The result is that this particular building experiences DSSI effect far beyond any other structure in the world. It doesn't act like other buildings built on soft soil, because its effects are so extreme. Instead, it simply began sinking until the ground around it had swallowed enough to hold it more securely. In other words, this tower might be tipsy, but it won't be toppling any time soon — although the many earthquakes in the area are welcome to keep trying. We won't be attempting to climb those stairs any time soon, though. {Play}

نفیسه
This comment was minimized by the moderator on the site