Cause to Enhance a Better Sense of Direction

If you're like us, navigation isn't your strong suit. Our main strategy is to always stick to paths that we know, which means we always have to swing by the house in between every destination. It would be so much easier to just have a sense of direction; too bad we were born without one. Except, it turns out that you can actually develop your sense of direction. Just like everything, practice makes perfect. {Play} 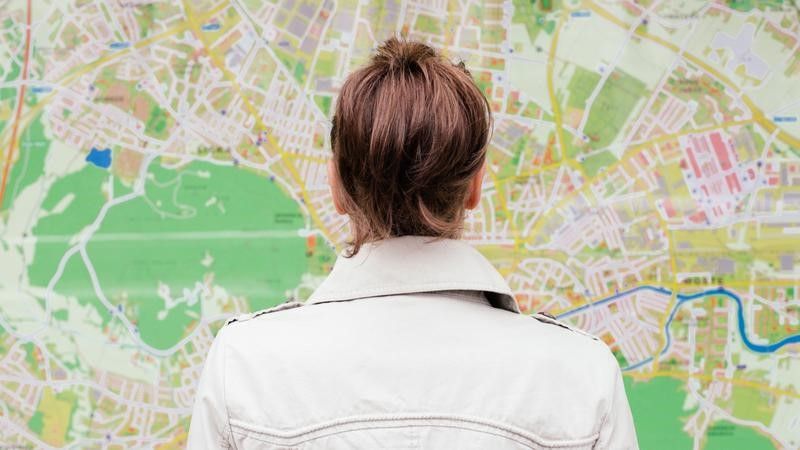 How is it that some people can just know which direction is north, even if you blindfold them and spin them in an office chair, while others struggle to keep "right" and "left" separate? It seems like it must be something that you're born with, and, well, it kind of is. What we call a "sense of direction" is really a relationship between several different factors, including spatial awareness, the accuracy of your mental map, and your ability to connect the things you see around you with their location in the world. But according to spatial-thinking experts Margaret Tarampi and Mary Hegarty, people without a strong sense of direction are perfectly capable of honing their existing navigational skills and developing new ones. {Play}

Speaking with New York Magazine's The Cut, Tarampi and Hegarty outlined a few actionable ways to improve your sense of direction, even if you feel like it's something you're innately bad at. First of all, try intentionally registering a highly visible landmark as an indication of direction. For example, if you live in Chicago, you can quickly figure out which way is east if you know where Lake Michigan is, and in Santa Barbara, the mountains are always to the north and the Pacific is always to the west. Just taking a moment to acknowledge the landmarks that you can use to navigate — and making sure to use them — will go a long way toward improving your overall sense of direction. {Play}

While using landmarks to navigate can be really handy, it's also important to have a few tricks for navigating when your landmarks are out of sight. You probably know a few already. For example, the sun rises in the east and sets in the west. If it's early in the morning or approaching twilight, that's a quick way to orient yourself. Another navigation hack for the outdoors is the old "moss grows on the north side of trees" trick — just be warned that moss mostly grows on the north side, and that if you're in the southern hemisphere, it's the other way around. Individual cities also have street-level tricks. For example, in New York, the traffic on even-numbered streets generally heads east. Keep these little tricks in mind, and soon navigation will become second nature. {Play}

There's a pretty commonplace, and common-sense, belief that the more you navigate via smartphone, the worse your overall navigation skills become. It's true that over-reliance on technology makes the navigation parts of your brain suffer. But there are ways that you can use technology to enhance your sense of direction as well. Take Dr. Susan Barry, for example. When her husband built her a sun hat that would buzz every time she faced north, she soon found that her sense of direction naturally improved. {Play}

According to Hagerty, you can even use a smartphone to improve your natural navigation, as long as you do so intentionally. She suggests two main ways to get the most out of your robotic copilot. First, as your device feeds you directions, make a point of connecting what you see in the real world with the landmarks you spot on your screen. And second, try taking several different paths to places you visit frequently — by trying out multiple ways to arrive at a destination, you can gain a better overall sense of where it is in relation to the rest of your world. {Play}