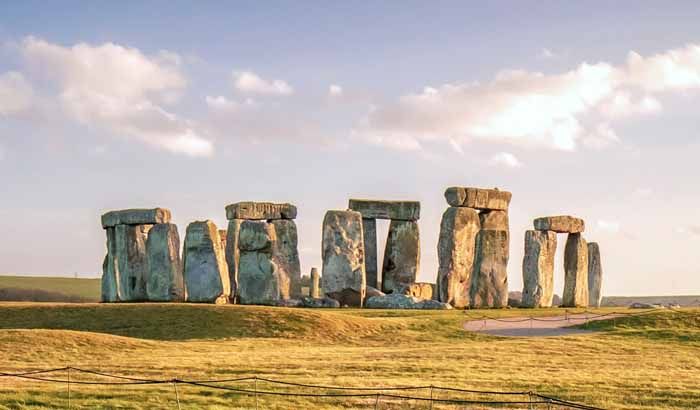 British icons: Stonehenge
Why are a circle of prehistoric stones the place to be for the summer solstice?

1. Listen for general meaning: Jackie and Richard talk about the connection between Stonehenge, the solstice and summer. Listen to the whole podcast and choose the best ending for the title.

2.  Listen for detail: listen again and answer the questions.

e)  1.Stonehenge looks almost like when it was first.
2.Stonehenge has been rebuilt.
3. It’s possible to know what the original construction was like.

f) Stonehenge could be years old.

g) Stonehenge was built to worship the sun. True or false?

i) Underline the correct words in italics in this

Despite / Because of the size of the stones......they came from nearby / far away.

j) The stones were erected using a pulley system. True or false?

k) Why are visitors sometimes disappointed?

e)  1.Stonehenge looks almost like when it was first.
2.Stonehenge has been rebuilt.
3. It’s possible to know what the original construction was like.

g) Stonehenge was built to worship the sun. True or false?

i) Underline the correct words in italics in this

Despite / Because of the size of the stones......they came from nearby / far away.

j) The stones were erected using a pulley system. True or false?

k) Why are visitors sometimes disappointed?

1. Stonehenge: The Secret Stones
a) Jackie and Richard will get a maximum of 17 hours sunshine.
b) The Earth is tilted at 5 degrees.
c) Richard says the hottest month of the year is towards the end of summer.
d) Spring is from the spring equinox to the summer solstice.
e) It’s possible to know what the original construction was like.
f)  Stonehenge could be 5000 years old.
g) False
h) Some stones are 4 m high, 2 m wide and weigh 25 tons.
i) Despite , far away
j) False
k) It looks different to how they imagined

Jackie: Right, so starting with the end of that list Richard, um... it’s almost the 21 st of June so for people like us in the northern hemisphere we’ve almost got the longest day of the year.

Richard: And of course in the southern hemisphere, it’s coming up to the shortest day.

Jackie: Yes. So I think we’ve got about seventeen hours of daylight to look forward to. Fantastic. Why is that though? [laughs]

Richard: It’s all to do with the tilt of the Earth.

Richard: Um... as the earth goes round the sun, it’s tilted at twenty three and a half degrees [Jackie: Right) so that forms the seasons. [Jackie: Right] So in our summer, the northern hemisphere is tilted towards the sun.

Jackie: Right, okay but it just doesn’t seem right somehow that for us, the days are getting shorter after the twenty first but really the hottest months are still to come.

Richard: Yes, I think August is the hottest month, isn’t it? But you’re mixing up the position of the sun with the weather. [Jackie: Right] It’s the weather systems that control how hot it gets here and what the weather’s like.

Jackie: Not us facing... being nearer the sun?

Richard: They’re connected but they’re not the same.

Jackie: Well, I always find that a bit confusing. Now summer, Richard, it’s interesting because um... it’s the summer solstice and for many it is considered the first day of summer.

Richard: Yes. Again weatherwise they say spring goes from the spring equinox to the summer solstice and then the summer ends at the autumn equinox in September.

Jackie: Now stones, okay. One place in the UK, England especially, that comes to mind when we think of the summer solstice, is Stonehenge.

Richard: Well, like a lot of places around the world er... Stonehenge is significant because of the sun. Stonehenge is, or rather it was, a ring of huge stones with an altar in the middle and much of it has fallen down but there’s enough of it there to work out what it originally looked like. So the important thing is: the rising sun only reaches the middle of the stones for one day of the year when it shines on the central altar and that day is the day of the summer solstice.

Jackie: Now it’s very big for ... Pagans to go there, Richard isn’t it? They have a big festival there.

Richard: Yes, and the Pagans then, like a lot of people around the world at the time believed that the mid-summer sun had particular powers.

Jackie: Yeah, but I mean Stonehenge is an amazing place, just to look at, but there are a number of other intriguing things about the site. First they don’t actually know why, exactly why it was built. Right? Secondly, the stones, and they’re enormous these stones, Richard, some of them are four metres high right, two metres wide, I mean they weigh twenty five tons, they didn’t come from nearby some of them came from um... about 150 miles away which is how many kilometres? 100 so kilometres, right.

Jackie: They don’t know how it was built. How did those people all that time ago put the stones there?

Richard: Yes and... and especially Jackie, all those many years ago, the people didn’t have the aid of the wheel or even a pulley system.

Jackie: A pulley system? Yeah. So an amazing place. But they don't know who built it, how they built it or why they built it. Have you been there, Richard?

Richard: Many, many years ago when I was a small child.

Jackie: And what did you think?

Jackie: A lot of people can be very disappointed when they go because there are always so many fantastic photographs and when they get there, they always say it’s much smaller than they imagined. But it’s a very, very special place.

رحیم
This comment was minimized by the moderator on the site

Saha
This comment was minimized by the moderator on the site

That was awesome.Please upload more of these types of practice

امیرمحمد
This comment was minimized by the moderator on the site

Sia
This comment was minimized by the moderator on the site

Hi, thank you for this awesome podcast. Can we find the audios in any other applications or it is just published from the site ?!

Mari
This comment was minimized by the moderator on the site

سحر
This comment was minimized by the moderator on the site

پرستو
This comment was minimized by the moderator on the site