Earthquakes were a pretty common phenomenon in ancient Greece — terrifying and destructive, sure, but also a known risk of living in certain areas. Which is why it's a bit strange that so many of their temples are built on fault lines. You can probably guess how that story went: temple goes up, earthquake goes off, temple goes down. And then temple goes up again. Was it just bad luck that led to the Greeks putting their most valuable buildings directly over Mother Nature's ticking time bombs? Or was it something they planned from the very beginning? {Play} 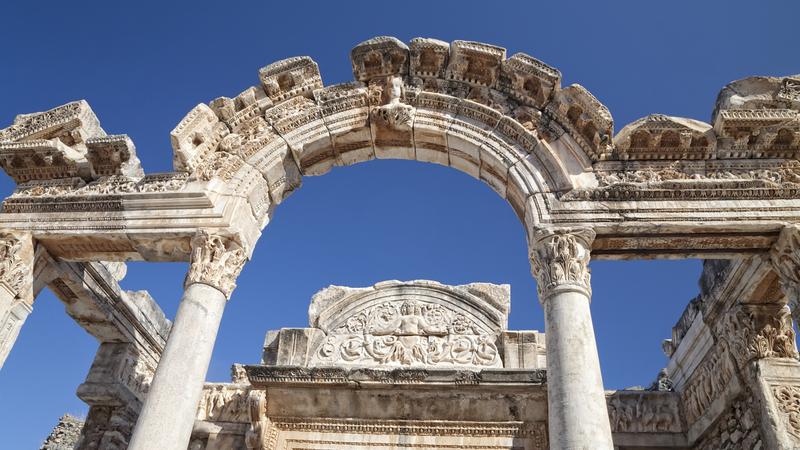 Temple of Hadrian in Ephesus, Turkey

Bringing Down the House

Greece is crisscrossed with fault lines. In some ways, it would have been hard not to accidentally line up a temple with an earthquake-crossing zone. But the strange thing, according to geoscience communication professor Iain Stewart, is that they'd rebuild those temples despite the frequency of their destruction. At first, he told Live Science, "you think, 'That's bad luck, isn't it?' Then it dawns on you. These people weren't stupid. There was this grand dawning that there was probably something deliberate." {Play}

One of the best-known examples of a temple built over a fault line is at Delphi, where ancient Greece's favorite oracle resided. In one famous prophecy, the Oracle at Delphi told the mad Roman emperor Nero to beware the number 73. But instead of living to 73, as he assumed the prophecy meant, he was killed in a rebellion led by 73-year-old Galba. The hot springs below the temple were a major part of the lore that surrounded the temple at Delphi, and were a direct result of the temple's position over a fault line. So was the earthquake that destroyed the temple in 375 B.C. {Play}

Professor Stewart believes several other temples fall into a similar category. Cities and religious sites at Mycenae, Ephesus, Cnidus, and Hierapolis all seemed to overlap with heavy seismic activity. Perhaps the reason lies in a more primordial understanding of earthquakes. Instead of a minor inconvenience that sometimes escalates into a major catastrophe, ancient Greeks might have seen the rumbling earth as a generative force in the world — a channel for divine visions, or a gateway to the underworld. Or maybe they were all just getting high. {Play}

True Prophecies or Tripped Out Visions?

See, there's something else about the Oracle of Delphi that might reveal where she got her ambiguously worded prophecies. According to Plutarch, the Pythia (the group of women who traditionally played the role of oracle) saw their visions in mysterious vapors that rose from chasms in the ground. And in 2001, researchers found evidence of those vapors — as well as their hallucinogenic properties. Ethylene would have been among those gases, and it would have facilitated a disembodied feeling, a sense of euphoria, and a trance-like state. {Play}

So what if those other temples had similar ventilation issues? Even if they never garnered the acclaim that comes with several generations of mystic seers, those temples besides the one at Delphi would have been able to take advantage of the hot springs and subterranean fissures that come along with a nearby fault line — and that would have seemed awfully underworld-y to any faithful visitors. {Play}

هادي
This comment was minimized by the moderator on the site

فهيم
This comment was minimized by the moderator on the site

❤saina❤
This comment was minimized by the moderator on the site

ديبا
This comment was minimized by the moderator on the site

It was so yummy, while eating on snowy day , seem's romantic